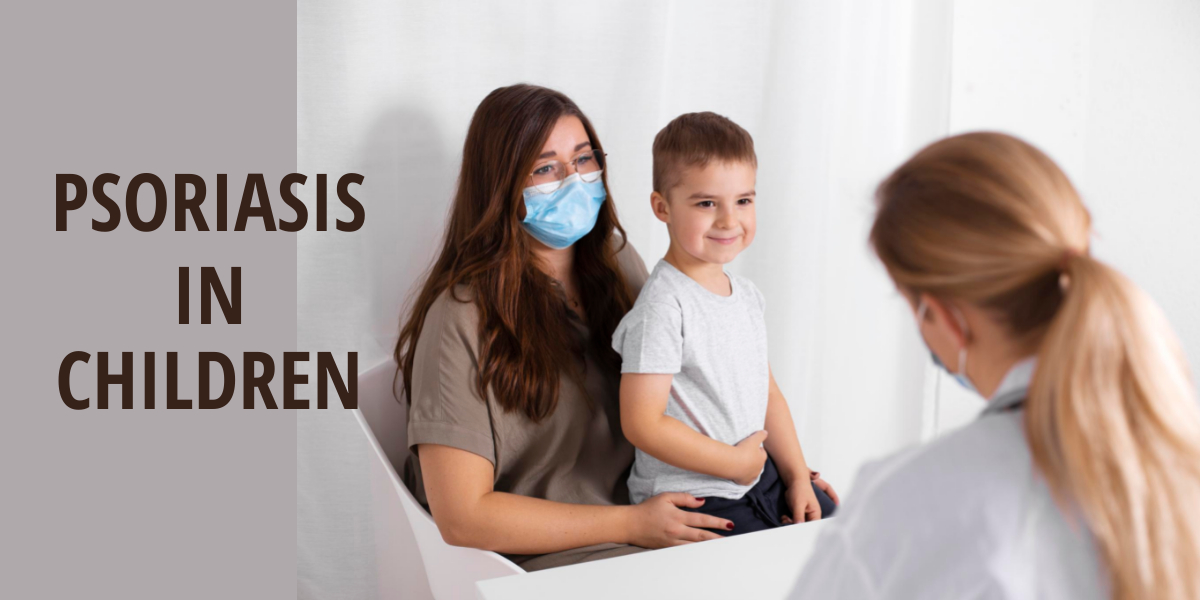 Prevalence of psoriasis in children:

Psoriasis is a chronic inflammatory autoimmune disorder affecting skin, nails, and joints in grown adults and young children. In children, it appears different in morphology, symptoms, and effects of the disease. Almost in one-third of cases, psoriasis begins in early childhood. The incidence in children has only doubled since 1970. The prevalence of the disease has seen a linear progression from 0 to up until 18 years of age. It is a considerable health care problem among children. Plaque psoriasis is the most common psoriasis affecting children, with 41 percent of prevalence. Thirty-two percent of psoriasis cases are diaper psoriasis, and 22.2 percent of cases are inverse psoriasis. More than 30 to 50 percent of adults have recorded psoriasis in their life before 20 years of age. It is more prevalent in the USA than in the UK and Asia. Young and teen women under 20 years of age have the threat of psoriasis more commonly than men.

Signs and symptoms of psoriasis in children:

The psoriasis is more flexural and facial in children. The plaques are thinner and smaller, making the differential diagnosis of psoriasis more tricky in children than adults.

Psoriatic Diaper rash or infant psoriasis in infants: 26 percent of the adults now have complained or have been affected by napkin psoriasis as infants. The navel and diaper area are the sites of disease in infants. The area around the inguinal folds and diaper region will develop well-demarcated lesions, macerated. Also, there will be bumpy, red erythematous plaques, elevated only minimally. A widespread eruption of lesions breaks within a couple of weeks in young infants affected by psoriasis. These are often unresponsive to the psoriasis dermatitis treatment. Diaper psoriasis is difficult to treat.

As said, plaque psoriasis is a common form of psoriasis. Similarly, it is so dominant in children with 30 to 75 percent. But the plaques are thinner and lighter. The frequency of the disease increases with age. The scalp, face, and genital psoriasis are also under the plaque. The frequency of this form of psoriasis will be the same as that of adults. The plaques of the scalp are sometimes very thick and can grow around the hair shaft. Plaques results in hair fall and premature baldness in children. Plaque psoriasis looks like atopic dermatitis. Although it mainly affects extremities like elbows, scalp, face, knees, and umbilicus, it can be generalized. Face and genital regions are more frequent areas in childhood.

Role of genetics in psoriasis in children

Psoriasis area severity index and body surface area, children’s dermatology life quality index are the tools to evaluate the severity of the disease and the quality of life altered by the symptoms. The severity of psoriasis is defined by the inability to respond to topical treatment, degrees of disabilities, the presence of comorbidities, etc. The criteria of severity are the same in children as in adults. These measures should be above 10 in children considered for systemic therapy instead of topical therapies.

Other comorbidities associated are hypertension, abdominal obesity, diabetes mellitus, hyperlipidemia, asthma, Crohn’s disease, and celiac disease. Obesity has been the focus of much investigation as moderately, and closely obese children had more significant risks of psoriasis. Also, in children who are not obese but with psoriasis, pruritus, sweating, and more sports activity increased the visibility of lesions. It affected their self-esteem and active lifestyle. Many children, therefore, adopt a sedentary lifestyle, which increases obesity. Metabolic syndrome is another comorbidity in children. A bigger waist circumference correlates to age and gender, high systolic blood pressure, and high fasting glucose count under the metabolic syndrome.

Pediatric psoriasis has a detrimental effect on children. It interferes with their self-esteem, social relationships, sports, school activities, and extracurriculars. This disease, in particular, hurts the life of children as the symptoms are only gruesome. The questions related to the itching and the treatment regimens also add to it.

In adult psoriasis patients, 60 percent suffer psychiatric issues. But in children, the problems of anxiety and depression are relatively minimal. Still, social discomfort, embarrassment, and anxiety are there among children.

Ultraviolet radiations are utilized for phototherapy. Narrowband UVA and UVB radiations are opted to use. Narrowband UVB is more effective and well-tolerated among children with guttate and plaque psoriasis. It is only considered an option when the rest of the topical treatment options fail. The tenure of the treatment is also kept minimal because of the ailing side effects. It is given for as long as 3.3 months alone. Only a few patients are treated with psoralen UVA because of its long-term toxic products. Short-term effects of UV phototherapy include red skin, burning, pruritus, and blistering. Carcinogenicity is another long-term complication of the same.

Topical treatments are the first line of treatment for psoriasis. But in pediatric psoriasis, the drugs require a label prescription. However, the treatment options are chosen based on the vehicle, location, lesion characteristics, patient preference and lifestyle.

Topical corticosteroids are the most commonly used topical treatments in adults and children. Halobestasol 0.05 percent and clobetasol propionate emulsion 0.05 percent effectively treat pediatric plaque psoriasis. There will be no side effects for a two-week treatment with topical steroids. A tingling burning sensation will linger with the prolonged application. In adults, prolonged usage of steroids is skin atrophy, dermatitis, etc.

They are prescribed solely, that means as a monotherapy. But Vitamin D analogs can also be utilized in combination with topical corticosteroids. A commercial blend is formulated with calcipotriol and dimethicone propionate to avoid separate applications and for patient compliance.

This combination used in children for four weeks and four days per week has excellent results and safety. Visible effects are seen within the first week of treatment with calcipotriol-dimethicone propionate.

Tacrolimus 0.03 to tacrolimus 0.1 percent and pimecrolimus are two proven calcineurin inhibitors in adults. In pediatric patients, using tacrolimus 0.1 percent has been of significant efficacy and substantial improvement. Even in the sensitive areas, genitalia, and face, the lesions have seen clearance in a month of use. Tacrolimus, 0.1 percent ointment, used for a month in children, reported only one case of pruritus reaction so far. Also, the utilization of pimecrolimus 1 percent in the pediatric psoriasis population is not proven.

Systemic therapy is when the topical treatments do not suppress the disease. This route is generally avoided due to the preliminary clinical trials and lacked awareness of this approach in children. The systemic therapy is not approved in pediatrics, so it is used off-label.

Methotrexate is a potential systemic drug prescribed to treat psoriasis in adults, and it is successful. But in children, juvenile idiopathic arthritis, inflammatory bowel disease. But in children with plaque psoriasis, oral or subcutaneous routes. Doses of methotrexate are withdrawn after the therapeutic control is achieved. But a small dose is continued as a lower dose to stabilize the maintenance of the disease. Regular administration of the folic acid is continued after methotrexate to decrease the side effects. Side effects of using methotrexate in children are nausea, vomiting, stomach disease, liver functioning issues, and infections in the first months of treatment.

Again it is one of the efficient drugs utilized for treating psoriasis in adults. In children, if used, it demands higher doses than in adults because of the pharmacokinetics, and the weight-to-body ratio in children is more than that of adults. However, cyclosporin use in pediatric psoriasis is not approved. The side effects of this drug are hypertension, nausea, diarrhea, neurotoxicity, and skin cancer.

Retinoids treat erythrodermic psoriasis and pustular psoriasis. Earlier, Etretinate was a pediatric retinoid in children. But, now it is replaced by acitretin, one of its active metabolites. The doses of retinoids in young girls are taken care of because of their high teratogenicity and slow clearance. Prolonged usage can result in decreased bone mineral density. Ocular side effects like dryness and blurred vision are common. Liver functioning and enzymes tests, lipid profile, and renal functioning tests should be regular while on retinoids.

Etanercept is a biologic approved to treat psoriasis in children with severe psoriasis flares. It precedes a placebo or in combination with a topical corticosteroid. Compared to other systemic therapies, etanercept has relatively fewer side effects.

It received approval for treating children with severe plaque psoriasis. It has a higher proportion of results in children than in the methotrexate group. No drug-related serious infections have complained. Ustekinumab was approved to treat severe chronic plaque psoriasis in adolescents older than 12. It is considered in a treatment plan only if there is an inadequate response or intolerance to systemic therapies and phototherapy.

The psoriasis area and severity index (PASI) and global physician assessment take the lesion and area score and calculate the ultimate severity index. The above descriptions then categorize this.

Psoriasis can be very uncomfortable for children to deal with. As there is no permanent cure for psoriasis, medicines used in children’s psoriasis treatment may have side effects, and sometimes some drugs can not be used in the long term. Considering these factors natural treatments such as Ayurveda are much beneficial for children.

Ayurveda treatment for psoriasis uses natural ingredients to treat psoriasis along with dietary and lifestyle changes. Rather than depending on medicines, Ayurveda encourages people to eat healthy which suits to cure the disease, and a lifestyle that promotes and encourages to restore health naturally.

Psoriasis is a skin condition that causes red and scaly patches on the skin. It can be difficult to treat, but there are ways you can help your child feel better. In this article, we have learned in detail about children’s psoriasis, its treatments, and their limitation. Ayurvedic treatments for psoriasis in children can help your kid to get out of psoriasis in a natural and healthy way.

For more information about Ayurvedic Psoriasis Treatment for Children, you can call us at +9945850945

Limited consultations per day with prior appointments only.

Watch the case study of Ayurvedic Psoriasis Treatment for Children