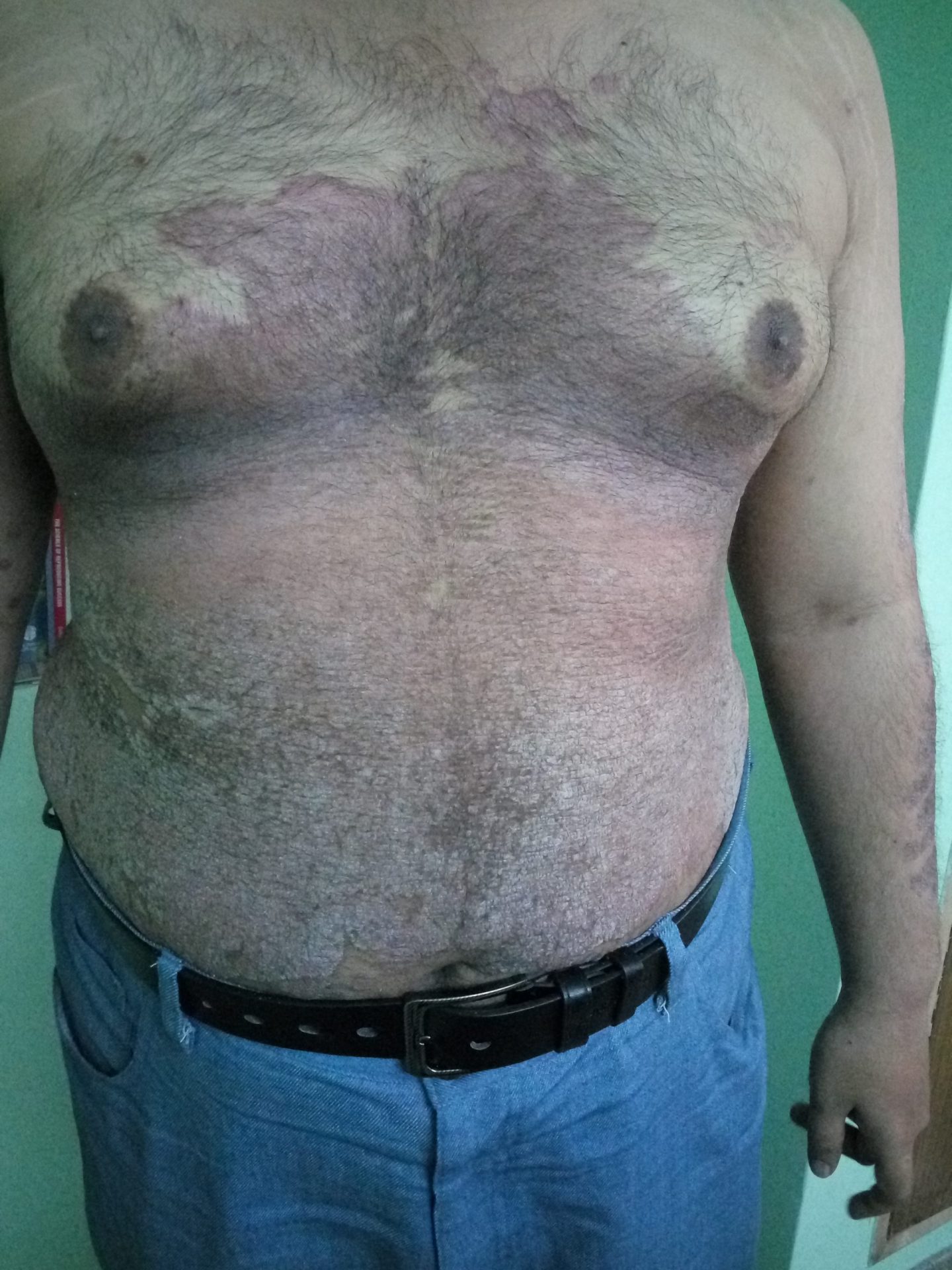 Plaque psoriasis most common kind of psoriasis is complained by 85 to 90 percent of the population. Also called psoriasis Vulgaris. Red bordered patches with silvery plaque centers are the characteristic appearances of plaque psoriasis. In India, the prevalence of psoriasis is far more in men than in women. Men in their thirties or forties are more prone to psoriasis.

Research records in our country showed upto2.8 percent prevalence. Various factors cause psoriasis. Ethnicity, genetics, lifestyle, and medications used. Patients are seen from 28 years onwards. Plaque psoriasis is seen worsening in seasons like monsoons and winters. It is most evident in Indians living in the south and north America apart from the natives. 50 percent of the people living with plaque psoriasis also have scalp psoriasis reportedly. It is also closely diagnosed along with psoriatic arthritis.

Signs and Symptoms of Plaque Psoriasis:

If the skin affected by the plaque psoriasis is microscopically examined, the epidermis shows layers of cells. Apart from that, the epidermis is seen to develop ridges and produce a lot of protein called keratin. The layers underneath show a lot of neutrophils, lymphocytes, and dilated blood capillaries. Digging deep into the physiology behind these changes in the skin, we can see there is a lot of inflammation and immune system actions happening against the skin cells.

As we know psoriasis is caused by a mistaken impulse of our immune system. Which is otherwise called an autoimmune reaction. The skin cells receive a signal to produce new cells. So they overproduce cells which form as plaques. The fighter cells of our immune system attack the healthy skin cells. Inflammatory reactions happen in the skin layers. This ends up with red and inflamed skin along with a pile of overgrown skin cells.

Lymphocytes, cytokines, activated genes, and neutrophils come to the site and bind with the skin cells to fight them. And this results in increased and irregular keratin production in the skin and the dilation of the blood vessels that run in the skin. Each cell of the immune system outrages chemical and physical changes in the skin. That is why psoriasis is said to be unyielding and does not have a definite cure.

Twin studies and genetics has been greatly investigating the genetic lead for psoriasis. 70 percent of identical Twins, 20 percent of non-identical twins have a risk of developing psoriasis. Reportedly one-third of the people living with psoriasis have a family history of the disease. Scalp psoriasis and psoriasis arthritis are closely associated with plaque psoriasis.

The other triggers for psoriasis can be long-term usage of nonsteroidal inflammatory drugs, corticosteroids, hormonal therapy, contraceptive pills, malarial medications, antibiotics, and pregnancy.

Managing plaque psoriasis can be easier if followed by the guidance of a dermatologist. The drugs and treatment alone do not suffice.

Psoriasis management demands a disciplinary lifestyle too because it can potentially cause multiple comorbidities.

Although, as the treatment takes a good time, and the shedding begins. The medications and care still need to be taken to prevent future remissions.

Psoriasis is not contagious, but it takes a toll on the emotional and mental state of the patient. It disturbs the aesthetics. The right treatment and right care are necessary to prevent the worsening.