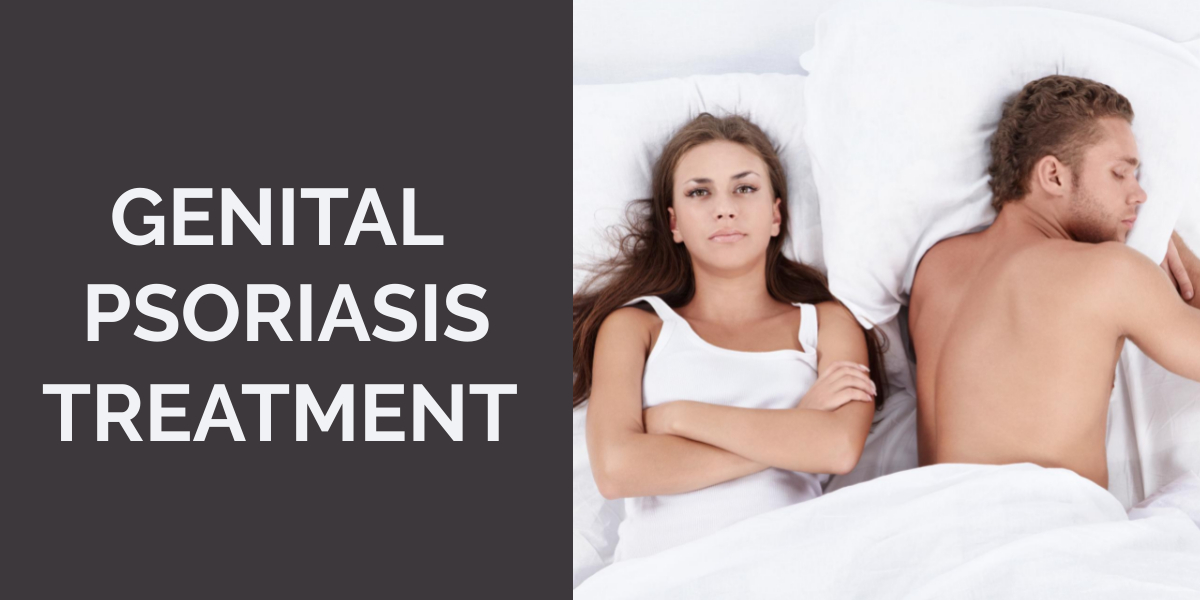 Psoriasis is a well-rooted disease in our country. It is a skin disease that happens in many forms and affects each area of the body specifically. Psoriasis is an autoimmune disease that results in unwanted complex reactions within the body’s immune system and manifests as skin lesions.

Psoriasis affects the skin, scalp, nails, genitals, oral cavity, synovial joints as in psoriatic arthritis, etc. each of these forms has its characteristic signs, distinct medications, and progression of its own. One of them is genital psoriasis. Which is quite prevalent, and common. But not often complained, or spoken about because half of the patients do not feel comfortable talking about it to the physicians.

Psoriasis, as years are passing by, is only growing in prevalence. It is more common in men than in women, and also men in their forties and fifties are affected. Whereas genital psoriasis is found in newborns, babies, and teens to geriatric adults. A study revealed that 63 percent of the patients living with psoriasis have experienced genital psoriasis at least once in their lifetime.

Whereas genital psoriasis, the one we are talking about, is 11 percent. From the research and statistics that are drawn, from the hospital records in our country, the prevalence is noted as very lesser rather than in its spread.  The reason is the discomfort of the patients in talking about the disease and getting treated.

Had genital psoriasis been talked about and brought awareness more openly there would be fewer dangers of self-treatment and complications with the progression of the disease.

In babies lesser than two years of age, the genital folds show redness of the skin, called erythema. Commonly called the napkin psoriasis. It is well demarcated but intense. Which goes after topical applications of ointments.

Plaque psoriasis which is the most common form of psoriasis is also seen in the genital areas. Psoriasis of all forms hurts social life and has a depressing toll on an individual but genital psoriasis is very stigmatizing. Be it mild, very severe, or less, the struggle is very gruesome if it’s genital psoriasis.

Confidence, gait, walking, sitting, wearing clothes, having intercourse, sex, and menstrual cycles all get affected when genital regions undergo any kind of injury, pain, infection, or allergy. In women, it is more prevalent at 65 percent than in men. Also, it is the most unspoken issue of all.

Symptoms and signs of genital psoriasis:

Itching – A lot of itch happens in psoriasis. Genital psoriasis is no exception. As it happens in the most private and sensitive parts like groins, thighs, anus, creases between thighs and groins, upper thighs, vulva, vagina, pubic areas, penis, scrotum, etc., the itch is more intense to bear. It is the most debilitating symptom of genital psoriasis.

Itch as a symptom has complained in more than 65 percent of women and 45 percent of men. It is the worst part of psoriasis that keeps up all night. Also, in some, the urge to scratch can end up bleeding. Itching also affects the sex life predominantly.

Scales as in psoriasis are not seen visibly as they fall off in walking and in sitting. But the redness of the skin, with demarcated borders, but without scales is another symptom of genital psoriasis. In babies, it’s all around the napkin folds appear more like rashes.

Discomfort, pain, irresistible itch, and cracking of skin are also noticed in genital psoriasis. As most skin diseases that happen in the genital region look alike, a broad spectrum certified dermatologist must be consulted for diagnosis.

Sexual dysfunction is one major issue of genital psoriasis. Interestingly it is more commonly complained about by females than by males contrary to the belief. Genital psoriasis shows up as Symmetrical plaques that appear around the vulva and perineum in females. In severe cases of the disease, and in rare instances, bright red erythematous plaques also ooze out from the vaginal mucosa.

Irritation and trauma are caused by the movement, underwear, urine, feces, and local infections around the genital region.

In worsened irritation conditions, the secondary lesions appear unaffected as in the Koerner phenomenon.

Scarring does not happen in genital psoriasis. However, in rare cases, two patients have reported atrophic scarring of labia minora. In some, the scarring represents sclerosis.

Half of the patients do not go see a doctor or discuss the disease, with anybody else because of shyness and embarrassment.

Also, the lack of awareness and communication in this area of disease has made even the signs and symptoms of genital psoriasis less known, unrecognizable, and undefined.

Even if you have a sexually transmitted disease, it is not diagnosed as genital psoriasis.

Tinea corporis is another fungal disease that appears like ringworm, which also appears like psoriasis. Langerhans cells histiocytosis, Paget’s disease, and necrolytic migratory erythema are other diseases that come in the differential diagnosis of genital psoriasis.

However, a certified dermatologist, who has expertise in psoriasis cases is one reliable source to go in case of genital psoriasis. Apart from the physical examinations, all of these diseases are eliminated by testing the skin scrapings.

Skin scrapings are collected and treated with potassium hydroxide, fungal and bacterial cultures. A skin biopsy is taken into consideration to evaluate or confirm these different etiologies.

Even if a person is already being treated with any other form of psoriasis, it is still important to take it to the notice of the dermatologist about genital psoriasis. Because the genital area is thinner and more sensitive than other parts of the body it needs milder care and different medication rightly chosen.

The treatment plan may include a mild corticosteroid, a calcitriol ointment, which may or may not be in the plan, a medium-strength corticosteroid which is given for a shorter period, a coal tar cream which again is mild, a calcipotriene cream, a pimecrolimus cream, a tacrolimus ointment, or a biologic treatment. All of these are picked and recommended based on the severity of the disease, the lifestyle of the patient, and the affordability and adaptability of the drugs.

Calcipotriene is prone to irritate the skin, so it should be used in appropriate care while applying to the genital skin. Calcitriol does not have any irritating properties.

Fluticasone propionate 0.005 percent, is a mid-strength corticosteroid and is used in short term. As short as twice daily for two weeks. This is taken on an eight week, with two consecutive weeks of course dosages, mostly not more than a maximum of four weeks chosen.

The skin in the genital area is sensitive and thinner, the steroids tend to get absorbed so quickly. They have an increased percutaneous absorption in the skin of the genital area. Therefore, they are used for only short periods of treatment. They are also given in conjunction with other topical therapies so that there is efficacy. There are also potential risks or side effects in using the steroids for more than a recommended time.

Greater strength corticosteroids are used to treat resistant and stubborn psoriasis. 0.1% betamethasone, 0.005% calcipotriol, and 1% pimecrolimus showed a significant decrease in pruritus and severity of the disease. Topical vitamin D  analogues are calcitriol and calcipotriol ointments. Usage of vitamin D analogues is prescribed for 8 weeks, to prove prominent results. Topical phosphodiesterase inhibitors are another class of drugs used. Roflumilast and placebo belong to them.

Biologics and other oral drugs include methotrexate and cyclosporine. A range of oral antibiotics, oral antifungals, antihistamines, and antipsychotics are a part of treating genital psoriasis. Crisaborole is one key medication used in genital psoriasis.

Treating recalcitrant or severe genital psoriasis with ixekizumab has provided symptomatic relief and improved quality of life to a great extent in patients. Also, instead of a placebo, it is proved superior in treating the high to severe cases of genital psoriasis. Instead of topical inhibitors, oral inhibitors have proven less adverse effects. In men, to treat genital psoriasis, tacrolimus appears very efficacious and well-tolerated.

Although the usage of calcitriol, calcipotriene, pimecrolimus, and tacrolimus has lower efficacy relative to the others, they are utilized as they are low-strength steroids and are good for long term treatments.

Regular moisturization is important for relief. Loose clothes and underwear, avoiding rubbing or exposure is a little care to avoid pain or burn. When the skin is raw and lesions are fresh, it is better to postpone sex. It is important to cleanse the area after having sex.

Dermatologists often fail in an effective treatment for genital psoriasis, that is why a regular update of the disease progress, sex life, and genital skin issues should be openly discussed and inquired about often.