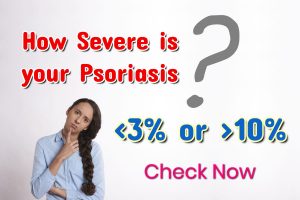 Psoriasis is a very complex autoimmune disease. It has several types which range differently in severity. They can be anywhere from mild to moderate and severe. Psoriasis involves a process in which the skin cells divides more repeatedly than the normal and form scales, lesions and pustules. They become irritating, itchy and painful. A silvery or white lining is formed around the patches of skin affected by psoriasis.

The cause behind this condition is believed to be an autoimmune reaction by our immune an. The T cells grasp this autoimmune response which is generated by mistake and divides into a number of cells. Neutrophils of white blood cells get divided. These reach the upper layers of skin to guard the body against the invasion of foreign bodies. They result in the formation of pus, and excessive production of the skin cells. These skin cells accumulate to form pustules, sores, raised bumps, lesions with pus, scales, dryness of the skin and redness along with inflammation. They carry on the process of inflammation as a line of defence in response to the immune attack triggered. This is the condition called psoriasis.

It is a chronic ailment, it’s treatments works on the impacts of psoriasis than the cure. To understand the severity of psoriasis, one should know the onset, symptoms, behaviour, impacts, treatments and ill effects of the treatments in detail. Psoriasis severity cannot be measured on a scale. However, efforts can be put to classify it based on various factors. It depends upon how much area of spread is observed on the body, how long has it’s been and also the symptoms of physical examination. 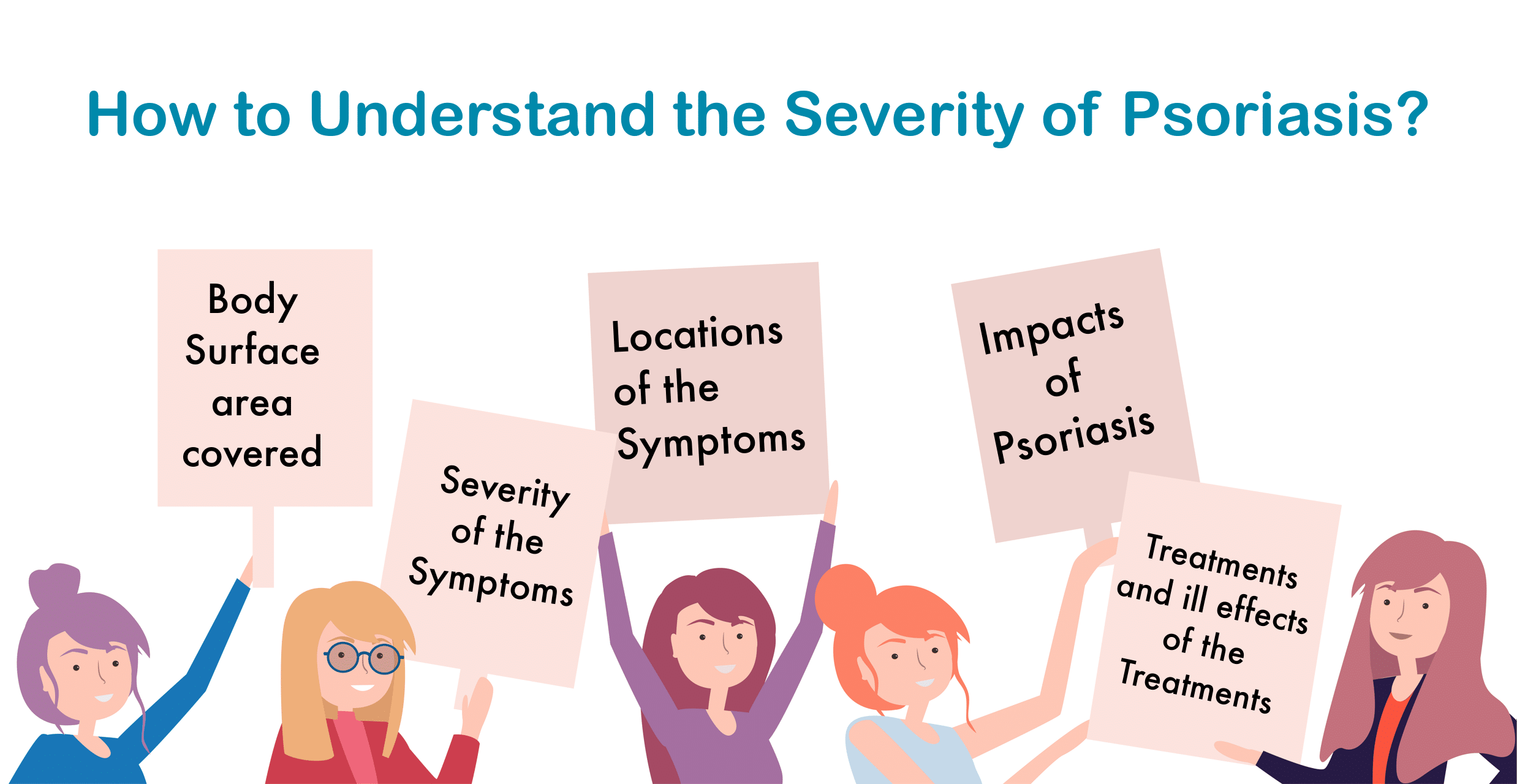 Tools for the determination of the severity of Psoriasis

After an assessment of your well being, physical changes, and effects on the body, psychological changes after the disease, Redness of the skin, scales and thickness of the lesions and pustules etc a dermatologist can conclude the severity of psoriasis.

Psoriasis Area and Severity Index is another tool which is very complex to use. It calculates the thickness of the raised bumps, area of the skin under psoriasis spread, the extent of scales, redness and inflammation. These are not used for children. There is yet another measuring tool that determines the severity of psoriasis in children.

Children’s dermatology life quality index is one such. This assesses the skin wholly, from physical to psychological conditions of the child and determines the severity scale.

PASI or psoriasis assessment severity score is also cited as tools for the estimation of severity. While the dermatology life quality index is used for adults. When the body surface area is considered, it is early measured as the area covered by psoriasis. 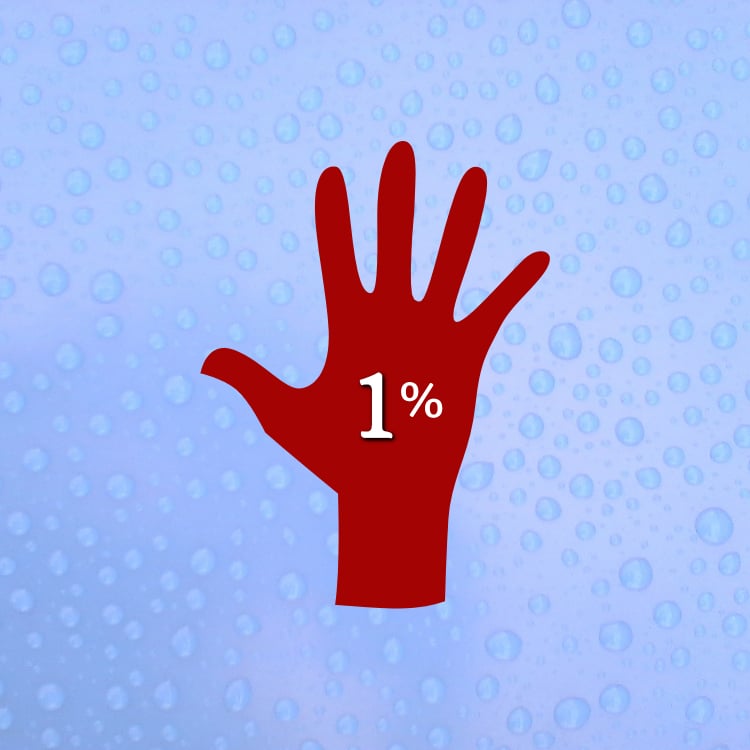 Impacts of psoriasis should always be discussed honestly with the doctor. Do not neglect the effects, the stress and depression you are facing, and the emotional and psychological changes while explaining to the doctor about your flare-ups.

Where to search for the symptoms of psoriasis in the body?

Psoriasis does not confine to just skin, it reaches to nails and joints. They are destroyed entirely or partially due to this condition. Intensity measure of psoriasis depends upon the skin, scales, lesions, pustules, and raised bumps on the skin. 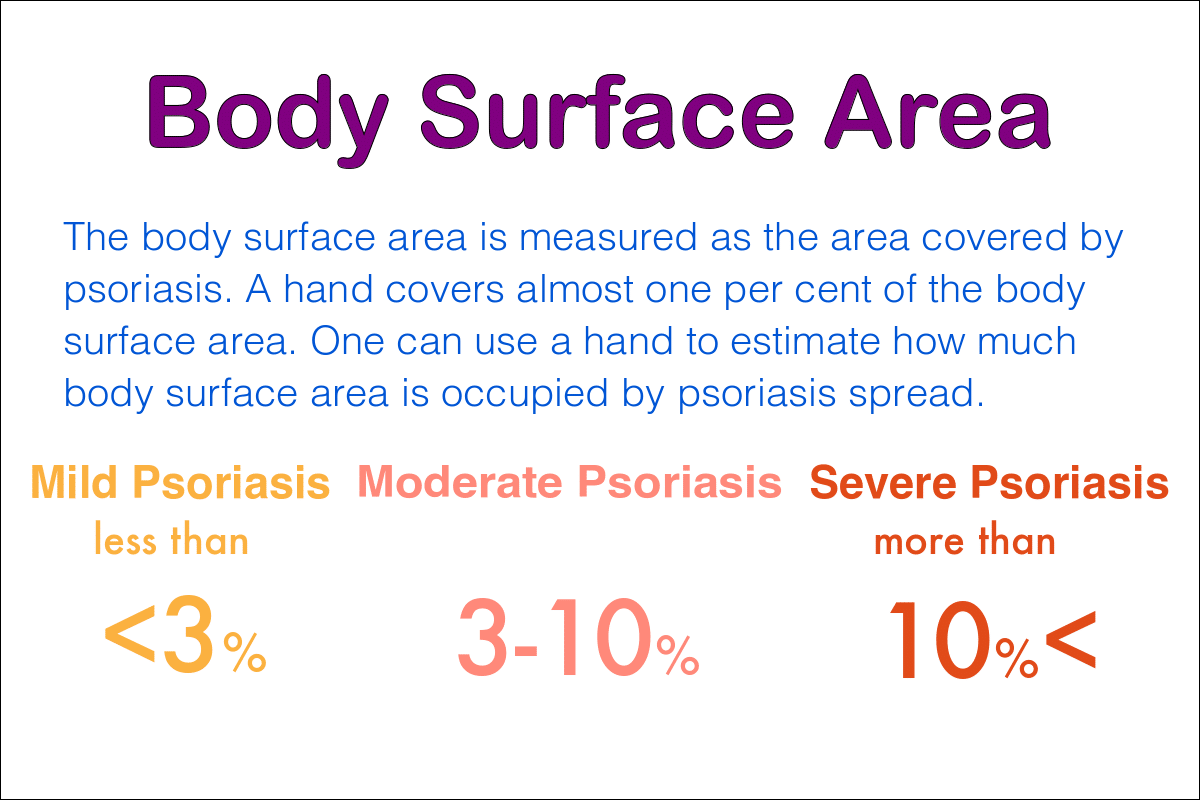 In mild psoriasis, less than three per cent of the body surface area is affected. There will be a single isolated patch scattered in few places across the body. Mild psoriasis can be observed in limbs, elbows, and scalp which are more vulnerable areas of psoriasis infection. If a topical medication can clear the skin psoriasis, with certain creams, ointments and solutions, then it is considered as mild psoriasis. This doesn’t make any drastic changes in the life of an individual. A little discomfort in social well being is noticed in general.

Moderate psoriasis is determined if the spread of psoriasis is more than three per cent and ten per cent. Moderate psoriasis can be treated with topical medication, retinoid analogues, calcineurin inhibitors, light therapies like UVA, UVB and excimer laser. This has remarkable impacts on an individual’s lifestyle and well being of ut not so significant as in severe psoriasis. It can be observed in-ground, torso, elbows, limbs, and head.

If this spread is not cleared by any of the mentioned treatments, it is considered as severe psoriasis. If the body surface area of ten per cent has been covered with the psoriasis patches, then the condition is very severe. The treatment for this condition used very impactful drugs like cyclosporin, methotrexate, biologics, that attack the immune system are used. Light therapies like psoriasis plus ultraviolet A, broadband UV rays, narrowband UVB phototherapy, psoralen medications are given. All the possible treatments using coal tar and salicylic acids, analogues of vitamin D to corticosteroids every aspect is utilized to clear the severe impacts of psoriasis.

Psoriasis is associated with chronic pulmonary and respiratory diseases, liver and renal diseases, diabetes, myocardial infarction and vascular diseases with blood vessels, rheumatoid diseases and heart strokes. These are the most dangerous threats in people with severe psoriasis.

The symptoms for identifying psoriasis are redness on the area that is covered with the patches. In erythrodermic psoriasis, the whole body will be covered by a redness cover. Redness is seen around the sores and inflamed areas. Irritation and itching arise around the pustules. Silvering or white lining with scales surrounds the patches of psoriasis spread.

The nails develop yellowish colour and discolouration occurs. In extreme conditions, the finger gets deformed and the nails loosen from the nail beds and fall off. In dactylitis, the fingers develop sausage-like swelling along with the skin disease.

Lower back, spine column, neck and pelvic floor etc are all affected with pain and immobilization happens. This is called spondylitis.

The psoriasis flare-ups make the normal life of an individual very miserable. The skin becomes itchy, bruised and unable to bear the sores. The nails colour changes, the scalp sheds flakes.

Some people mistake scalp psoriasis to dandruff and neglects the treatments. This makes the hair fall and sometimes bald too. Keeping the body hydrated and moisture, regular washing of hair etc should be done.

Taking care about the details of fingers, nails and skin is important in psoriasis. Dressings should be done regularly for the wounds, open cuts and injuries until they are healed.

People with psoriatic arthritis should follow a low impact full exercise regime. Taking hot oil massages and Epsom salt baths ease the pain. Vitamin D supplements and vitamin A analogues substitute the medications. The non-steroidal anti-inflammatory drugs like ibuprofen, naproxen, DMARDS like sulfasalazine and methotrexate are used to treat psoriatic arthritis. Biologics like interleukins 23 and 12 and interleukin 17 and T cell inhibitors are used to suppress the immune responses of the immune system.