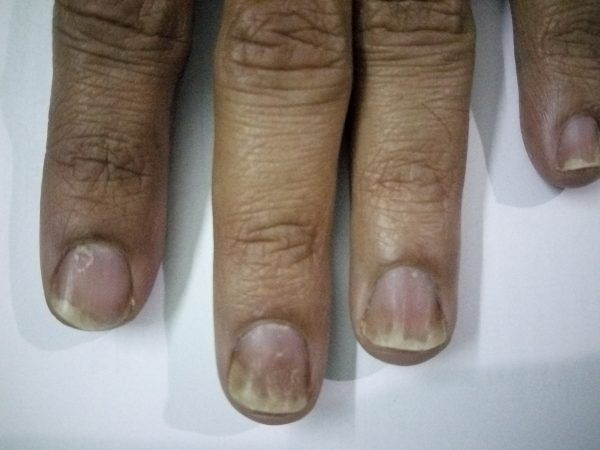 What is Nail Psoriasis?

Nail Psoriasis is a disease usually associated with Psoriasis. When psoriasis starts impacting the nail and nail bed causing nail dystrophy. It is commonly seen with the person who is suffering from any form of psoriasis. There are very fewer people who first showed the psoriatic symptoms in nails.

Signs and symptoms of Nail Psoriasis:

Signs and symptoms of nail psoriasis vary according to the part of the nail affected. Most commonly seen nail changes are:

Nail psoriasis has an unpleasant look because of changes in its appearance and structural changes. The common complications are

Nails are considered as the Malas (Waste product) of Asthi dhatu (Bone). During the dhatwagni paka the sara bhaga gets converted into the next dhatu i.e. Majja dhatu and during this process, the waste or mala of Asthi dhatu develops nails and hairs.

Most people see the changes in nail are those who are previously suffering from psoriasis, but researchers say that Less than 5% of patients have solely psoriasis of the nails. According to Ayurveda when a disease is not treated on time the vitiated dosha’s gradually spread to other Dhatu’s and produces diseases related to that dhatu. In psoriasis, if the dosas aggravated are not eliminated from the body those will enter into other dhatu like Asthi (bone) resulting in psoriatic arthritis and Nail psoriasis ( as the nail is mala of Asthi dhatu).

To know more about Psoriasis in Ayurveda Click here

As psoriasis affects the nail when the nail is being formed, it has to be treated from the root. When psoriasis is treated effectively the nail psoriasis also subsides. In general, It can take six months to a year for an affected nail to grow out and be replaced by a new nail.

How long may it take to see the changes in Nail psoriasis?

In general, it depends on many aspects like age, nature of the deformity, injuries, etc… The minimum duration may be six months.

* “Results may vary from person to person.”