According to modern science, Psoriasis is an autoimmune disease that causes raised, red, scaly patches to appear on the skin. It typically affects the outside of the elbows, knees or scalp, though it can appear on any location.
In Ayurveda, all skin diseases are named under ‘Kusta‘. The literal meaning of kusta is that which changes the normal skin to an abnormal state.
What happens when it’s ignored?

When skin diseases are not treated in time or if ignored it will spread all over the body quickly.

The exact cause of Psoriasis is unknown, but it is believed that a combination of several factors contributes to the development of this disease. In Ayurveda, there are specific causative factors which will responsible for the initiation of skin disease. 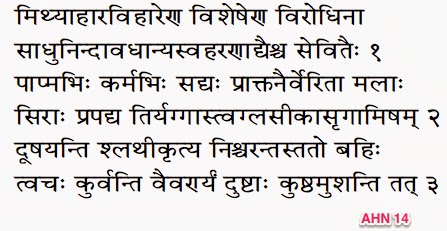 Pathogenesis according to Ayurveda:

Though the classics named different types of skin disease with different names it’s also said that all the skin diseases have the involvement of tridoshas and the names are given according to the predominance of dosha involved in it.

Plaque psoriasis is the most common form of the disease and appears as raised, red patches covered with a silvery white buildup of dead skin cells or scale. These patches or plaques most often appear on the scalp, knees, elbows and lower back. They are often itchy and painful, and they can crack and bleed.

2.  Guttate Psoriasis
This form of psoriasis appears as small, red, separate spots on the skin. Guttate lesions usually appear on the trunk and limbs and can number in the hundreds. Sometimes lesions form on the scalp, face, and ears. They usually are not as thick as the lesions that characterize plaque psoriasis. This form can precede or coexist with other forms of psoriasis, such as plaque.
3.  Inverse Psoriasis
Inverse psoriasis shows up as very red lesions in body folds. It may appear smooth and shiny. Many people have another type of psoriasis elsewhere on the body at the same time. Inverse psoriasis is found in the armpits, groin, under the breasts, and in other skin folds on the body. It is particularly subject to irritation from rubbing and sweating because of its location in skin folds and tender areas. It usually lacks the scale associated with plaque psoriasis due to the moist environment. It is more common in overweight people and people with deep skin folds.
4.   Pustular Psoriasis
Pustular psoriasis is characterized by white pustules (blisters of noninfectious pus) surrounded by red skin. The pus consists of white blood cells. It is not an infection, nor is it contagious. Pustular psoriasis is primarily seen in adults. It may be limited to certain areas of the body — for example, the hands and feet. Generalized pustular psoriasis also can cover most of the body. It tends to go in a cycle with reddening of the skin followed by pustules and scaling.
5.  Erythrodermic Psoriasis
Erythrodermic psoriasis is a particularly inflammatory form of psoriasis that often affects most of the body surface. It is a rare type of psoriasis, occurring once or more during the lifetime of 3 percent of people who have psoriasis. It generally appears on people who have unstable plaque psoriasis. This means the lesions are not clearly defined. Widespread, fiery redness and exfoliation of the skin characterize this form. Severe itching and pain often accompany it.
Psoriasis on Specific Locations

Psoriasis can show up anywhere—on the eyelids, ears, mouth, and lips, skin folds, hands and feet, and nails. The skin at each of these sites is different and requires different treatments

Though the conventional medical system is unable to pinpoint the specific cause for Psoriasis, there are different triggering factors which help in outbursting of Psoriasis. Though there are a lot of researches going on, there is some breakthrough attained about psoriasis in recent times, but still, there is a lot to be understood.
Considering the facts about skin diseases and its reason, classics are shown the clear path to be free from skin disease.

How a cleaned cloth gets colored easily, in the same manner, if one undergoes shodana chikitsas like Vamana, Virechana or Raktasravana the elevated doshas get eliminated from the body and then the timely administration of other medications will cure all skin diseases.

It is said that one has to undergo repeated Vamana for every 15 days once, Virechana once in 30 days, shirovirechana or Nasya (nasal medication) has to be done once in 3days and Raktamokshana has to be done once in every six months.
The repeated Shodana will help in keeping the body free from the accumulation of toxins which are responsible for the diseases. By correcting from the root and avoiding the causative factors will help brings back normalcy in health.

In the person who is unable to undergo Vamana or Virechana, the doshas get spread all over making the disease difficult to treat. But one has to try to eliminate aggravated doshas slowly.

After eliminating doshas by Raktamokshana and administrating Vamana, Virechana to eliminate malas from the body lepas will help to eliminate skin disease.

It’s evident that Ayurveda works wonder when it comes to most of the chronic and repeated skin problems and even in psoriasis. This is because its approach is holistic rather than merely treating the disease. Any disease which manifests docent have a single cause and it’s multidimensional with co-factors, so the healing should also be a multidimensional approach.
Ayurveda works in a very simple way where the suitable panchakarma therapies will help to eliminate the accumulated causative factors from the body. After cleansing depending on the condition step by step medicines both internal administration and external applications are advised to correct the physiological functions of the body.
The mind plays a vital role in the healing process as thoughts directly act on the cells to be healthy or unhealthy. Tuning the mind to produce healthy cells and staying in a positive mindset is also essential.
Coming to food, it is real medicine when you are sick. The health depends mostly on the food what we eat because the cells need the energy to perform its function normally. If we choose to be ignorant about the food there will be short of the needed fuel to cells to function along with the accumulation of undigested food starts accumulating as toxins which tend to impair health.
Following a specified daily regimen will boost the process of healing like physical exercise,  etc….